10 Selected Designs for Views of London 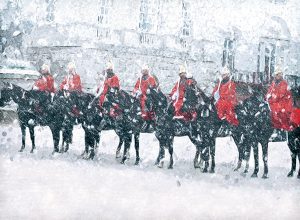 This is a landscape card with a gloss finish.

It depicts the Horse Guards in the snow on the parade ground just off Whitehall, used for the trooping of the colour for the Queens official birthday and other ceremonial events. The red capes and black horses stand out against the snow and the building in the background which once the headquarters for the British Army Henry VIII commissioned the parade to be built for tournaments including jousting. The area has been used for a variety of reviews, parades and other ceremonies since the 17th century.

It is now a popular tourist spot. 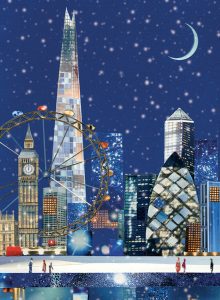 A portrait style card with a gloss finish.

Designed in a contemporary style with vibrant colours, snow falling and a new moon which sits against the dark snowy sky. The card depicts some of the iconic landmarks of London City mainly the newer buildings which have appeared over the last number of years. Big Ben is in the forefront with the London Eye and the Shard behind. To the right are Canary Wharf Building and the Gherkin with other office blocks surrounding. The London Eye carriages are all in different colours adding a new dimension to the view, with the lights from the Canary Wharf building shining in the night sky. The reflection of the buildings in the river can be seen at the bottom of the card. A different type of design to the normal traditional Christmas card. 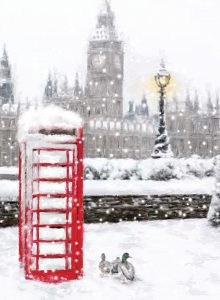 A portrait style card with a gloss finish.

There is a lovely snowy view from the Thames embankment across the river to Big Ben and the Houses of Parliament. The vibrant red of the telephone box stands out against the whiteness of the snow with snow building on top and against the windows and getting deeper and deeper on the ground. A family of ducks are heading towards the river or perhaps to shelter against the wall from the snow. The glow of the lamplight is a warm yellow against the grey sky which looks like it has more snow to come. A truly Christmassy image. 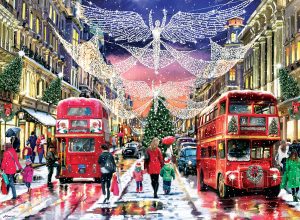 Designed as a landscape card in a gloss finish.

As a landscape style card will  ensure enough content can be seen of busy Regent Street at Christmas time. The stunning Christmas lights are lit which are a big attraction all across London at this time of year. Lit Angels look like they are flying high in the dark sky night with lights advertising local business in between.  Blue lights are draped across the road between the buildings giving the effect of twinkling stars. The traditional red bus is moving slowly through the heavy traffic.  Motorcyclists, cyclists, cars and buses weave their way through this busy street. The hustle and bustle of Christmas shoppers on the pavement with some probably making their way to the underground carrying heavy bags containing Christmas gifts for family and friends. You can also see the wonderful architecture of the old buildings on either side lit by up-lighters to enhance the scene.

All this makes for a wonderful Christmas scene. 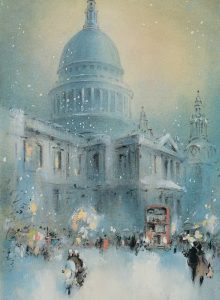 Printed on a portrait size card with a gloss finish. A portrait card will enable as much of this magnificent building to be seen as possible. Designed to look like a water colour painting with charcoal etchings around the building and the red bus. There are plenty of people mingling in the snow. The couple on a scooter riding carefully through the snow. You can see the majesty of St Paul’s dome against pale sunlit sky with the snow falling around it. A very lovely sedate card in muted colours. 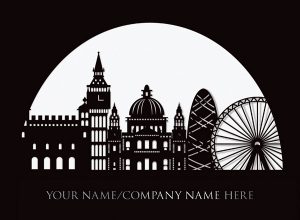 This is a landscape card in black card.

An unusual laser cut design featuring some of London City’s famous landmarks in black against a pure white insert.  You can have your name or company name can be embossed in silver foil on the front.

It features Big Ben, St Paul’s Cathedral, The Gherkin and The London Eye delicately laser cut in a half moon shape.

An unusual, interesting design compared to the traditional Christmas cards.

London in the Snow 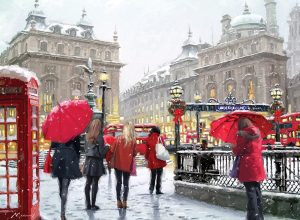 A landscape produced card with a gloss finish. Capturing Piccadilly Circus on a snowy day with shoppers and commuters dressed in seasonal red and sporting red umbrellas to shield them from the snow. The underground sign is bedecked with Christmas wreaths on either side, the bright blue and white underground sign standing out in the gloomy day.  The red telephone box stands out against the backdrop of the stone coloured old buildings as the snow builds up on top of the phone box. The glow from the lights in the office buildings and street lights give a warm feeling to the scene The statue of Eros stands high, towering above the numerous buses making their way slowly through the traffic.

A black cab is stopped at the traffic lights waiting to move into the heavy traffic.  The green dome of the Alliance Life Building can clearly be seen to the right of the image.  A lovely Christmas scene. 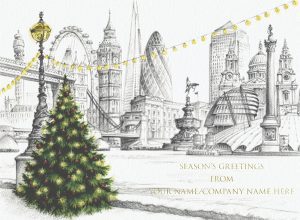 This is a beautiful landscape card with a matt finish. All of London’s iconic landmarks are depicted on the card new and old.  London Bridge, Big Ben, The O2 Arena and St Paul’s to name a few, in a pencil sketch effect.  The images are slightly raised to give a more tactile feel to the card. The stunning Christmas tree in the forefront is decorated with red baubles and gold embossed stars.  The globe just above the tree has a gold embossed inner with gold embossed fairy lights festooned across the card giving it a truly Christmas feel.  You can have your name or company name on the front in gold foil to give it an extra personal touch. A stunning card with a different finish, a different feel compared to a gloss card. 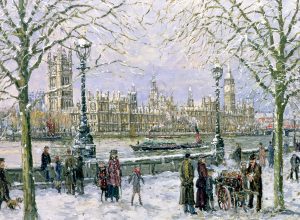 This card is a landscape design with a gloss finish.

A Victorian scene with a view across the Thames to Big Ben and the Houses of Parliament.  A very snowy day but that hasn’t deterred families and individuals strolling along the side of the river. The trees still have a few brown leaves clinging on and are laden with snow. There is a chap with a cart selling hot roasted chestnuts that will keep hands warm against the cold, children can be seen huddled around the cart to get some warmth.  There is man sat on the wall that looks like he could be telling stories to a small group. The turrets of the Houses of Parliament are covered in snow as are the black street lights which stand out against the backdrop of the stone building. You can just see the Palace of Westminster to the left just behind the stone tower.  The Thames is very busy with barges being towed by small steam boats.  There is a small boat with a sail moored across the river with another further up with 2 red sails. In the distance you can see Westminster Bridge with numerous of the traditional red buses travelling across.  This card evokes a lovely Christmas feeling from the Victorian era.

Westminster Bridge in the Snow 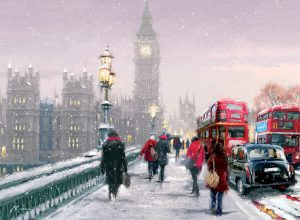 A landscape style card with a gloss finish.

People rushing across the bridge mid afternoon in the snow, the grey clouds still look they have a lot more snow to come.  The open backed buses hark back to a different time period where you got on the back took your seat and a conductor would come and take your fare and give you your ticket from a manual machine that had a distinctive sound when the handle was turned.  The black cab follows slowly behind the bus taking a fare to some unknown destination.

There is a warm glow given off from the Parliament windows and the street lights on the bridge.  The snow has accumulated on the top of the steel barrier on the bridge.  The palace of Westminster can be seen in the distance with lights from the windows shining out through the falling snow.

You can almost feel the cold in this snowy Christmas scene.