Can You Send Christmas Cards to Non-Christians?

Christmas is, of course, a Christian celebration. The word Christmas is a shortened form of “Christ’s mass”, and it celebrates the birth of Jesus Christ. It’s also known, less commonly, as the Feast of the Nativity.

There’s no doubt that Christmas has evolved from its early roots, and is now celebrated primarily as a gift-giving festivity in most of the Western world. However, for many people, Christmas remains an essentially religious holiday.

If you’re a Christian, you may be considering whether it’s appropriate to send a religious-themed Christmas card, or any Christmas card at all, to somebody who isn’t also a follower of Christ—be that or somebody of a different religion (such as a Jew or a Muslim), or someone non-religious. 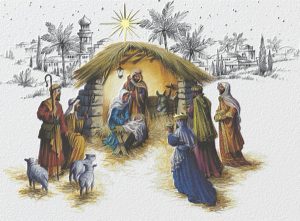 Can You Send Christmas Cards to Non-Christians?

December 25th hasn’t always been a religious holiday. On the Roman calendar, this was the date of the winter solstice (which today occurs between December 20th and 23rd each year). The winter solstice was acknowledged and celebrated by religious and non-religious people alike, as it’s the shortest day of the year – meaning that spring is soon on its way.

But in the fourth century A.D., Christians decided that this was a fitting day on which to celebrate the birth of Christ (the precise date being unknown). Since then, in the Western world at least, it’s been known as Christmas.

And though it was originally a Christian celebration, one could argue that Christmas is now enjoyed by almost everyone in the U.K. in some way, regardless of faith.

Only 53.6% of people in the U.K. identify as Christian, and yet you’ll be hard-pressed to find someone who doesn’t at least use the public holiday as an excuse to eat, drink, be merry, and swap gifts with friends and family. But what about Christmas cards?

Are Christmas Cards a Christian Tradition?

Christmas cards occupy an odd place in the Christmas canon. They’re as ‘Christmas’ as it gets, but they aren’t as old as other parts of the tradition. They became popular when postage stamps became cheap enough for common people to use, and when mass printing became cheap enough to make them, in the first half of the nineteenth century. That’s long after other traditions (like that of gift-giving) became common. It’s also, of course, long after the religious aspects of the Christmas story were first celebrated.

As such, even the earliest Christmas cards didn’t necessarily feature religious iconography. The earliest printed cards featured images of celebrations, of animals, or of snowy scenes—just like ours today. Cards with religious sentiments or imagery have long been available, but weren’t ever the only kind available.

Today’s Christmas cards can be as religious or otherwise as you like. Christmas Connections offer personalised cards with religious imagery or text, and many more without—so the choice is yours!

Is It Offensive to Send Christmas Cards to Non-Christians?

This all depends on the person. For the vast majority of people, Christmas cards have lost most (if not all) of their religious connotations. They’ve crossed the boundary from religious tradition to cultural tradition, and people of all faiths and none can be a part of the same culture. That means you can safely assume that most people will welcome them, whatever their faith.

There are always exceptions to every rule, however. A person with a strong faith in another religion might not appreciate a card with obvious Christian iconography, for example. And some people like Jehovah’s Witnesses outright reject the idea of Christmas, cards and all.

How to Send Christmas Cards to Those of Other Faiths

So how do you know which of your non-Christian friends and family members would appreciate a Christmas card, and who wouldn’t? How do you know what kind of card to send, and how to go about selecting and sending one in a sensitive way? Here is what we’d recommend.

Take a moment to think about the person and what they might like. Are they easy-going, or are they uptight? Do they take their faith (or non-faith) very seriously—is it a core part of their worldview or not? The less seriously the person takes their religion (or atheism), the less likely it is they’ll have a problem with a Christmas card.

You could also do some general research about the individual’s religion (if applicable). That might give you a clue as to whether a Christmas card would be well-received. For example, although Christmas isn’t celebrated in Islam, most British Muslims don’t mind being given Christmas cards (as long as they don’t contain Christian imagery or wording).

2) Opt for a Non-Religious Card

Another way to minimise any potential offence is to pick a non-religious Christmas card. A person of another faith might take a card with lots of Christian iconography on it badly. Avoid cards depicting Nativity scenes, angels, and the like. It’s also best to avoid Christmas trees and, though he’s not necessarily associated with Christianity, Father Christmas.

Luckily, there are many non-religious (but still beautiful and tasteful) Christmas cards out there. Opt for a simple illustration of a robin, or a photographic card depicting a snowy woodland scene, for example.

If you write a personalised message inside the card, this will show the person that you’ve thought about them. If you sent a bare-bones card, they might think they’re just another name on your Christmas card list, and that you hadn’t taken their faith into account. But a handwritten message will indicate that you’ve put thought into the gesture.

If you order through Christmas Connections, you can also edit the standard greeting that comes printed inside the card. Avoid mentioning the word ‘Christmas’, if possible. You could wish them ‘Season’s Greetings’, ‘Happy Holidays’, or even a ‘Happy New Year’ instead.

Finally, if you’re still unsure whether sending a Christmas card would be appropriate or not, simply ask the person in question. They won’t be offended by being asked a straightforward question. On the contrary, they’ll likely be touched that you thought to ask, and that you took their faith (or lack of it) into account before sending them a card.

On the one hand, this does mean that the card won’t be a surprise any more. But if you really don’t know whether they would take receiving a Christmas card well, then you ought to be safe rather than sorry. This will avoid any potential awkwardness – and you’ll know what to do in the future, too.