Why Does Father Christmas Wear Red on Christmas Cards?

Everyone’s familiar with the festive character of Father Christmas (also known as Santa Claus). Most of us spent the first eight or nine years of our life waiting in awe for him to come down the chimney and fill our stockings on Christmas Eve night. He’s such a popular character that you’re almost certain to get at least one Christmas card featuring Santa this year.

Father Christmas’s bespectacled, bearded face and fur-trimmed red suit is instantly recognisable. But have you ever wondered why, of all colours, red is Santa’s signature hue?

It may surprise you to discover that Father Christmas hasn’t always dressed in red. His bright red suit and hat are relatively modern inventions, only becoming common and recognisable over the last hundred years or so.

So why does Father Christmas wear red on Christmas cards? When did he start dressing in scarlet, and what did he wear before that? Read on to find out.

When Was Father Christmas Invented?

The legend of Father Christmas is loosely based upon the real historical figure of Saint Nicholas of Myra. The patron saint of children, Saint Nick lived from 270 to 343 AD. He was well known during his life for secret gift-giving, particularly to poor children.

Over the following centuries, the story of Saint Nicholas morphed gradually into a legendary character, which became known in Dutch as ‘Sint-Nicolaas’ or ‘Sinterklaas’. This term eventually morphed into ‘Santa Claus’, which is a name still used for Father Christmas today (chiefly in North America).

In England, people have been personifying Christmas (that is, turning the idea of Christmas into a human figure) since the 1400s. But he only became known as Father Christmas in the mid-1600s.

One of the earliest known depictions of the personification of Christmas comes from 1652. Referred to as ‘Old Christmas’, the character wears long robes and a hat, and sports a long straight beard. It’s not a million miles away from our modern illustrations of Father Christmas. But as the illustration is in black and white, we can’t be sure of what colour he was supposed to be wearing.

If you go all the way back in time to the original Saint Nicholas, you’d find that he’s dressed in a bishop’s robes. That’s because he was a bishop—the Bishop of Myra—way back in the 4th century. And for many centuries, the legendary figure of St. Nick was indeed portrayed as wearing long, sweeping robes.

By Victorian times, the image of Father Christmas had changed somewhat. For one thing, he was often depicted as a gnome (so he could fit down chimneys). While he was uniformly drawn as an older man with white hair, everything else about him was muddled: he could wear full robes or regular clothes, and his outfit could be any colour – such as yellow, black, green, brown, or sky blue.

Ask ten people and a good six or seven of them might tell you that Coca-Cola invented Father Christmas’s red suit. But that’s not entirely true.

The Coca-Cola Company has been associated with the colour red since the company was founded in 1886. And it is true that Coca-Cola have run advertising campaigns featuring Father Christmas for almost a century now.

They began in 1931, running print ads at Christmas-time featuring Father Christmas himself in bright red robes complete with white fur trim. Haddon Sundblom was the artist who drew most of these print ads, and so his name has gone down in legend as that of the man who ‘invented’ Santa’s outfit.

But if you dig deeper, you’ll find that the colour scheme long predates the existence of Coca Cola altogether. An illustration by Thomas Nast in 1881 clearly shows Santa Claus wearing a deep red coat, quite similar to the suit we see him in today.

So, Father Christmas/Santa Claus had been depicted in a red coat or red suit for many decades prior to the start of Coke’s Christmas adverts. Coca-Cola simply took advantage of the fact that this popular character already matched the colours used in their branding and logo.

When Did Father Christmas Become Red?

There is no consensus on quite why Santa’s almost always portrayed as dressing in red. Rather, there seem to be several different reasons, some of which may be more important than others (depending on your viewpoint).

Historians argue that the colour might come from a bishop’s traditional robes. It’s thought that bishops in St. Nick’s time—the real St. Nick, that is—may have worn red. This could have been a change that was introduced later in history, but whether or not that’s the case is irrelevant so long as depictions of the real St. Nicholas were in red robes.

And while Coca-Cola didn’t come up with the idea of Father Christmas wearing red, they’re at least somewhat responsible for that colour’s particular association with Christmas today. Before Coke’s adverts, Father Christmas was often shown wearing red, but in a far wider range of colours than today. The fact that Santa always wears red stems from their successful marketing campaign.

When Did Father Christmas Start Appearing on Christmas Cards?

Christmas cards first became popular in England, in Victorian times. The first mass-produced festive greetings card, designed in 1843, featured a family sitting down to a Christmas meal and enjoying some red wine together. And it wasn’t long before Father Christmas, who was already a popular festive figure, began appearing on Christmas cards too.

Victorian Christmas cards featuring Father Christmas most often depicted him wearing a red coat or robes. However, it wasn’t uncommon to see him wearing other colours, too – most notably, green.

When he wore green, Father Christmas could also be seen wearing holly and ivy decorations around his head, or carrying a Christmas tree. The green colour was used to signify the coming spring.

If he wasn’t wearing green or red, Father Christmas sometimes wore long white fur robes instead. This colour was chosen to resemble snow and ice – in this way, Father Christmas was depicted as a personification of winter itself.

Even in the 21st Century, Father Christmas remains a prominent figure on Christmas cards. You can’t walk into a card shop at Christmas time without being bombarded by cards featuring jolly old St Nick – whether he appears in the form of a traditional illustration or a funny cartoon. One thing is for sure: this festive character is still adored by both children and adults alike.

This year, why not order your Christmas cards online with Christmas Connections? We stock over 200 beautiful designs, many of which feature Father Christmas, such as this Santa Claus in Lapland card. For every card sold, we’ll donate 10p to a charity of your choice. All of our cards are completely customisable, and your order will come supplied with high quality envelopes. All that’s left to do is to sign, seal, and deliver them! 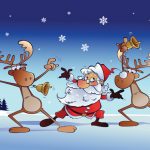 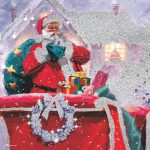 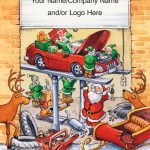 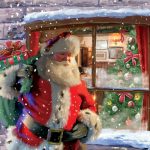